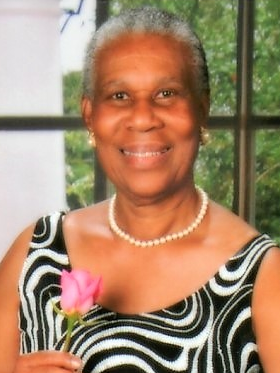 "Yesterday is gone. Tomorrow has not yet come. We have only today. Let us begin."
Mother Teresa

Cynthia grew up in Ashton, Westmoreland and excelled in school. She attended Ashton Primary All Age School and later in life obtained her GED and graduated from Kingsborough Community College in New York.

As a young adult, she left her family home and moved to St. Andrews, Jamaica to work and support her parents and siblings. In the early 1960’s while in St. Andrews, Cynthia met Vernon Bell. They later became the proud parents of Denise Bell and Grace Bell.

To better provide for her family, Cynthia emigrated to the United States; first to Florida, then for a brief time to Michigan before eventually settling in Brooklyn, New York. Once Cynthia established herself in Brooklyn, she sent for her daughters. During their formative years, Cynthia was both a mother and a father to her daughters. She made sure they knew how to be independent women, how to survive in the world and she encouraged them to always excel in whatever they did. Just like her mother, Cynthia strongly valued education and would often encourage her children to be charitable and help others in the family and in the larger community.

Cynthia believed in God and in his teachings. Over the years, she was a member of two church homes while living in New York. She contributed her extraordinary cooking talents and volunteered whenever the need arose. Cynthia was a charitable person who had a positive impact on many people’s lives. She believed in and emulated the sentiment, "I am a child of God".

Cynthia loved her family and one of her missions in life was to encourage them, uplift them and support them on their life’s journey. Her goal in life was always to be a better person; always living up to the tenets of Christian charity. In addition to her beloved mother, Cynthia considered Mother Teresa as a role model. She was inspired by Mother Teresa’s nurturing, caring and selfless acts of compassion. Cynthia considered herself to be extraordinarily blessed. She would often say that her storage basket was never empty and the more she gave, was the more that she received.

Cynthia worked for 21.5 years at the New York Telephone Company. Because of her wise planning, she was able to retire at an early age. During her lifetime she spent much of her time traveling the world and experiencing various cultures. She traveled to over 45 countries around the world: almost all islands in the Caribbean, and many countries in Africa, Europe, North America, Central America and South America.

Throughout her life, she focused on helping others. She learned that trait from her mother and she instilled that quality in her children. Cynthia was one of the matriarchs of the James family. She was a person of great character, integrity, compassion and humor. She frequently hosted Thanksgiving and Christmas dinners with the immediate and extended family. The family relied on her for assistance and advice and she always rose to the occasion.

She was elegant, stylish and classy. We are blessed and extremely fortunate to have had her in our lives. She was a great mother, friend and humanitarian. We will always love and cherish our time with her.

From 2012 to 2014, Cynthia was a snowbird, traveling between her homes in New York and Florida. In 2014 she moved permanently to Florida and continued her travels and charitable works until late 2019.

A memorial service is being planned to commemorate Cynthia’s life and legacy.

Share Your Memory of
Cynthia
Upload Your Memory View All Memories
Be the first to upload a memory!