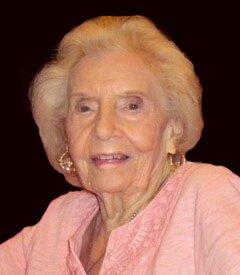 Please share a memory of Evelyn to include in a keepsake book for family and friends.
View Tribute Book

Evelyn T. Sullivan (nee Cunningham) passed away on October 8, 2022. She was 99 years old. Evelyn was a beloved daughter, sister, wife, mother, aunt, and grandmother. She is survived by 2 daughters, Patricia, and Margaret, 3 grandchildren, Tim, John and Elizabeth and her niece Ann Cunningham Tigue. She was an "honorary” Aunt to Donna McCarthy Delle Cave and, Jeremy, Justin, and Nicole Delle Cave.

Evelyn was a proud Brooklyn native through and through for her whole life no matter where she resided. She was born in downtown Brooklyn to Frank and Mary Cunningham; later moving to her treasured home on East 64th Street in Flatbush. She and her younger brother, Frank, shared many memories of growing up in Brooklyn. She attended Erasmus High School and entered the working world at the New York Telephone Company.

In 1944, Evelyn married Raymond S. Sullivan and raised 4 children-John, Patricia, Margaret, and Mary. She was totally devoted to her children and grandchildren and would do anything for them. She was the problem solver. She could most always figure a solution for any problem. When her granddaughter was seriously ill, Evelyn implored the help of Mother Theresa by writing to her at her Convent in the Bronx in May 1997, asking her to pray for her granddaughter. Mother Theresa replied with a beautifully written note saying that she would keep Evelyn's granddaughter in her prayers and sent a miraculous medal and her business card along with it. Evelyn treasured that letter, medal, and the prayers.

Evelyn had a full, active, and accomplished life with family, friends, travel, work, and Church. Evelyn always moved forward, including earning an Associates Degree at Kingsborough College at the age of 70! She enjoyed many happy decades with her High School Sorority, Bowling team, and Canasta Gro Evelyn traveled the country and to Europe with these friends and her family and was always ready for a good time adventure. She shared close lifelong friendships and adventures with her cousin Marian Geoghan and her dearest friends Catherine and Billy McCarthy. They always enjoyed each other's company and had lots of laughs. Evelyn loved a good party with dancing, especially if there was music from the Big Band era. Her 99th Birthday party was a hit, afterwards saying “That was a good party."

In addition, Evelyn was a multifaceted career woman. She began her work life as a messenger and later as a Telephone Operator at the New York Telephone Company. She spent 18 years in banking at Manufacturers Hanover Trust Co. followed by 20 years as a dedicated secretary to Dr. Britta Pedersen at St. Vincent's Medical Center. Evelyn reluctantly retired at age 85. She made life-long friendships throughout her working career.

Evelyn was a devout Catholic with a special devotion to the Blessed Mother. Her faith and her Good Shepherd Parish family were a large part of her daily life. Her faith and devotion helped her through difficult times. The advent of live-streamed Catholic Mass on TV was a godsend for her during the past year as she "attended” Mass while homebound.

Evelyn was a smart, fun, light-hearted Irish-American lady who loved people and was loved by many. No one can ever replace her. She will be missed but always remembered.

Please take advantage of the Tribute Wall tab to
express your compassion and condolences over Evelyn's passing.

For those who wish to send a floral tribute to the wake service,
please call Floral Fantasy Florist at 718-238-6978
or CLICK HERE to be directed to their website.

Mass of Christian burial will be held on Wednesday, October 12, 2022 at 9:45 AM at Good Shepherd Roman Catholic Church, Brooklyn.

Share Your Memory of
Evelyn
Upload Your Memory View All Memories
Be the first to upload a memory!
Share A Memory