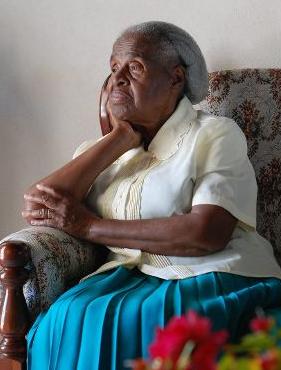 Cynthia Phyllis Babb was born October 20, 1927 in Venture, St. John, Barbados, West Indies to Lillian Gall and Charles Alleyne. She was the middle child of three daughters, with Golda Lovell being the eldest and Esme Cox, the youngest (both predeceased). Though not born in the Way, she was introduced to the “Truth” at a young age and quickly realized it was what her heart desired. She would profess at the age of 13, and later offered her life to the Work to further spread the Gospel. However, due to issues with her health, she was unable to fulfill that wish. She remained in Barbados where she played a prominent role in helping with her nieces and nephews and subsequently assisted her mom when her health began to fail her.

In 1967, Cynthia would migrate to the United States and settle with her younger sister Esme and assist in the care of her children. While in the United States, Cynthia began to pursue her second love, which was nursing. She took jobs in the healthcare field initially as a home attendant, then as a nurse’s aide, while taking classes to advance her nursing skills. She would retire from Kings County Hospital Center after many years of doing what she enjoyed, assisting in the care of newborns.

Over the course of the years, while attending meetings and conventions in Barbados, she met and formed a friendship with John Babb. This friendship continued to grow and would later culminate in their marriage in September of 1976. They would remain happily married until John’s passing in August of 2008. Cynthia then assisted in the care of her sister Esme, to the best of her abilities, until Esme’s passing in July of 2019.

While her memory would fade at times as she aged, her recollection of the Meeting, the Workers and her desire to serve God never wavered. This was often evidenced by her singing some of her favorite hymns, It Pays to Serve Jesus, Give me a heart and May Thy perfect love, amongst others. On Friday, April 10 th , 2020, after a brief illness, Cynthia passed from this life and was called Home to the place she spent her life preparing for.

Left to mourn her passing are her numerous nephews, nieces, great-nephews, great-nieces and extended family from the Alleyne, Cox, Goddard, Lovell and McCarthy families.

Share Your Memory of
Cynthia
Upload Your Memory View All Memories
Be the first to upload a memory!