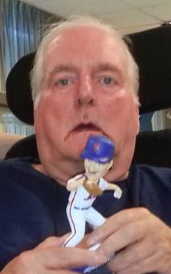 Richard Wilson was born in Brooklyn, New York to Irene and Vincent Wilson in August of 1948.  Richard was a beloved big brother to William Wilson and brother-in-law to Joyce Verderosa.  He was a devoted uncle to his niece Johanna and his nephew John. Although he never had a chance to meet her, we are sure he is looking over his great-niece Shea Irene, who was born during this pandemic.

Richard served in the United States Air Force, attaining the rank of Sergeant.  Richard was an active member of Holy Trinity Lutheran Church of Flatbush until he became a full time resident of St. Albans' Veteran Home.  Richard loved spicy food and always looked forward to his weekly visits from his brother Bill to see what delicious home cooked meal he was bringing him. On those special visits, Bill and Richard would pray together and listen to music.  Richard enjoyed watching sports and westerns on t.v.  Richard is going to be sorely missed by his family, especially his brother Bill.

If you would feel inclined to make a donation in memory of Richard, the family asks that it be kindly made to Holy Trinity Lutheran Church, (as he would have preferred) c/o Capital Improvement Fund, 4118 Avenue R, Brooklyn, NY 11234.

Share Your Memory of
Richard
Upload Your Memory View All Memories
Be the first to upload a memory!