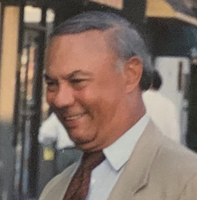 Keith Goss, beloved husband, father, and grandfather arrived at the gates of heaven on August 7, 2020. A memorial service was held at Horizons Funeral and Crematory in Boynton Beach, Florida on August 12th and a second service is planned at Marine Park Funeral Parlor in his "hometown" of Brooklyn, New York. His final resting place will be next to his beloved wife Eve at Calverton National Cemetery.

Keith was born May 24, 1940 in Kingston Jamaica to Keith and Mavis Goss. He moved to the states at the age of eight and excelled academically, graduating from Bishop Loughlin High School at the age of sixteen. He joined the United States Air Force, specialized in computer programming and was stationed at the Pentagon. As a civilian, Keith spent the majority of his career at Citi Bank eventually becoming a Systems Analyst Vice-President.

There is no question that Keith had a passion for all sports. He was an avid golfer and upon retirement worked as a starter at Jacob Riis Park Golf Course. If not playing, he would frequently be found watching a sporting event, enthusiastically yelling at a referee or umpire for a call they made that he obviously thought was wrong!

Keith spent much of his life serving others. As a recovering alcoholic of 48 years, he and his wife Eve were involved in supporting and helping others through Alcoholics Anonymous. Through his AA affiliation, he developed and maintained many long-lasting friendships.

Above all, the most important part of Keith's life was his Family. After marrying Eve, his family expanded from three to seven children and this Brady Bunch of sorts was his greatest sense of joy and fulfillment. Over the years, his family increased with the addition of six grandchildren and one great-grandchild.

A kind and gentle man, Keith left this world a better place and his spirit will live on in the lives of his loved ones.

Eternal rest grant unto him, O Lord, and let perpetual light shine upon him. May Keith's soul and all the souls of the faithful departed, through the mercy of God, rest in peace. Amen.

Please take advantage of the Tribute Wall tab to express your compassion and condolences over Keith's passing.