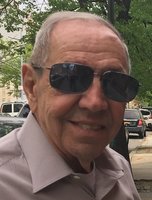 “Danny,” as he was called, will always be remembered for his kindness, his quick sense of humor that always brought joy to those around him, and most importantly his loving devotion to his wife Ann.

Ann was the love of Danny’s life and he always showed it. After 29 years of marriage, Ann suffered a stroke and during her eight-plus years as a patient in the Sheepshead Bay Nursing Home, Danny visited her every single day, caring for her during her times of need. Characteristic of Danny’s selfless devotion and unwavering positivity, he would lovingly tell his wife Ann while holding her hand during her time in the nursing home, “It’s ok. This is where we are at right now, and I’m here with you.”

Danny was born on December 17, 1931. He was raised one of six children on Dean Street in Brooklyn. Danny always mentioned his childhood fondly, having once said, “My mother and father were always doing everything they could for us. We did not have much in those days, but they were great times.” Danny returned to Dean Street for a nostalgic visit in May of 2018. The accompanying photo of Danny is from that day.

In 1951, with the Korean War drafting many of the guys in his neighborhood, Danny enlisted in the United States Navy for a four-year hitch. From the beginning, Danny loved being at sea while working long days of tending to the upkeep of the ship. He sailed the Atlantic Ocean and the Caribbean and Mediterranean Seas, visiting the Bahamas, Bermuda, Cuba, Morocco, Tunisia, Italy, Spain and France to name a few. Danny once told a fond story of riding horses during a beautiful sunny day while on leave in Cuba. He also spoke of spending memorable days in Naples, Italy (his family origin) and Monte Carlo on the French Riviera with his Navy pals.

After his time in the Navy, Danny returned home to Brooklyn and found work as a Linotype worker for a printing company (newspapers and magazines had to be set in printing type in those days). Around the age of fifty, Danny and Ann were married in 1981. Around that time Danny went to work for the Highway Department of the City of New York. Danny was initially hired as a laborer, later becoming an asphalt truck driver and was then eventually promoted to an office worker where he assisted in representing the City concerning road conditions. Danny was a good Union man during his twenty-five years with the City.

Danny was helpful to anyone who needed his assistance. He was amazingly handy and would always eventually figure things out when doing home projects. Danny enjoyed camping with Ann and they would spend most weekends at a beautiful Northern New Jersey camp ground or at the Jersey shore. Danny and Ann worked hard during their lives, but they certainly enjoyed themselves along the way!

Danny faced many difficult health problems during the past few years. Doctors said that his heart was weak, but in truth his heart was filled with love, kindness and strength. Danny’s favorite sport was boxing, which is not surprising because Danny had the heart of a champion!!!

Danny was a good guy to everyone, especially to his family. Danny truly admired and loved Theresa for all that she gave to him and Ann during his and Ann’s time of need. Danny will be dearly missed by his loving family of Theresa, Jerry Jr., and Christina Rosiello and by Joe, Nina, Catherine, Emily, and Julie Balsamo.

Mass of Christian burial will be held 9:30 AM on Saturday, November 9 at Resurrection R.C. Church, 2331 Gerritsen Avenue, Brooklyn, New York.

Eternal rest grant unto him, O Lord, and let perpetual light shine upon him. May his soul and all the souls of the faithful departed, through the mercy of God, rest in peace. Amen.

Please see SERVICE INFORMATION for details and directions of services.

Please take advantage of the condolence tab if you are unable to attend or merely wish to express your love and grief over Daniel's passing.

For Those Wishing to Send Floral Tributes please CLICK HERE.